Western Breeders Alliance combined for an early double with Mia Dolce and Cryptic Love at Belmont on Saturday.

Mia Dolce (Patronize) pinged the machine and made all the running to win the Glory Glory Plate (1000m).  She was a $2,000 cheapie for owner Giuliano Cianciosi from WBA at the 2018 Perth Magic Millions Winter Sale.

“She’s an absolute ripper,” rookie trainer Jayce Buckley said.  “She was a cheap purchase and has only had one spell in the last twelve months.  She’s versatile and will develop a very good three and four-year-old.”

Previously prepared by George Davies, Mia Dolce has been the busiest 2yo by far in WA this season winning 5 races in 13 starts for earnings of $193,050.  She was bred by Clive Atwell at Darling View Thoroughbreds and is the first foal of Perth winner Mia China Doll (Helter Skelter).

An hour later, WBA graduate Cryptic Love burst through a split in the straight to win the TAB Better Your Bet (1200m) for trainer David Harrison.

She is the third winner for Westbury Stud sire My Admiration at Belmont in a week following Cryptic Wonder and Ration Aly.  The trio were bred and sold by Westbury studmaster Phil Ibbotson.

Cryptic Love cost $30,000 from the WBA draft to the 2017 Perth Magic Millions.  She’s an older sister to Cryptic Wonder and has earned $225,640 for trainer David Harrison and his wife Jenny.

Patronize filled out a double of his own at Belmont when Jason Whiting lifted Fred Dag to a narrow victory in the Crown Perth Hcp (1400m).  “We got a good neck in front and then the other horse (Distant Trilogy) kicked back,” Whiting explained.  “He travelled well with blinkers but he’s got to learn to attack the line.”

Fred Dag is prepared by Bruce Watkins and is raced by his wife Liz in partnership with Namerik Thoroughbreds breeder Alan Bansemer who took the colt home to Serpentine after bidding stalled at $24,000 during the 2017 Perth Magic Millions.

His dam Comme Ci (Verglas) had a Safeguard filly sell for $60,000 at this year’s Magic Millions and she’s due to My Admiration off a September cover last year.

Fellow WBA partner Wayne Beynon (Einoncliff Park) was also on the mark with Why Choose Her at Pinjarra on Thursday.  The Choisir 3yo filly is trained by Ash Maley and won the 100 Club Applications Maiden (1000m) first-up this year.

She was a $40,000 graduate from WBA at the 2017 Perth Magic Millions.  Beynon bought her dam Little Wonder Why (Kala Dancer) for the same price at the 2015 Magic Millions National Sale.

Why Choose Her is a full-sister to Celtic Dancer (G2 QTC Cup) and her yearling half-sister by Magnus is also stabled with Maley in Gingin. 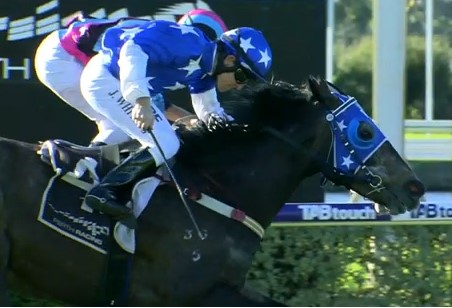